In 1886 James O'Leary bought 162 acres from homesteader William Long. In 1888, when Washington was still a territory, O'Leary built the house but didn't live in it. After other owners, then John and Kate Dougherty bought the house in 1898 and the family lived in the house until Leo Dougherty died in 1983.

The house was built near the Snoqualmie River in a little village called Cherry Valley. In 1910, railroads wanted the flat land where the village was located so the railroads moved the buildings, some to what became Duvall. The Dougherty House was moved up the hill to it's present site, pulled by horses. With a grant from King County, the Duvall Historical Society started working on preserving the house in 1985 with a lease from the Catholic Archdiocese who owned the house upon Leo Dougherty's death. The house has a special integrity as a 19th century farmhouse since it wasn't altered in the previous 100 years. No walls, doors or windows were changed. The original woodwork and staircase remain as well as the exterior siding. One acre of the Dougherty farmstead including the house was named a king county landmark, and now is listed as a National Landmark.

In 1997, King County purchased the 26 remaining acres with Open Space Funds and gave it to the City of Duvall. The Duvall Historical Society has a contract with the City to maintain the interior and keep it open to the public. The Historical Society has cared for the yard plantings and refurbished the interior, fitting it with furniture and other items to represent the earlier era. Other remaining buildings on the property include the milk house and the bunkhouse where Kate Dougherty, then a widow with eight children, boarded eight loggers.

Sundays, May through September

Stop by from 1pm to 4pm every Sunday through September 30th for a tour of the Dougherty Farmstead. Walk through the Dougherty House - built over 100 years ago – and visit the bunkhouse, milk barn, and pioneer cemetery nearby.

The Dougherty House is located at 26524 NE Cherry Valley Road in Duvall. 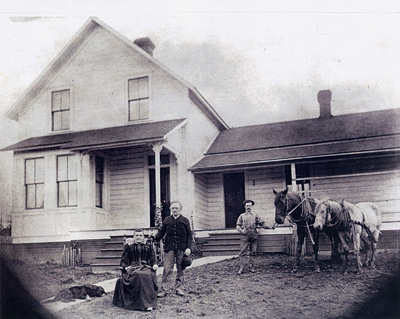 Click the arrow to start the video. Then, click the 'f' key on your computer keyboard to view it full screen.