In 1886, an early Pioneer and saloon keeper, named James O’Leary, deeded on acre of land to the Squak Methodist Mission for the building of a church and cemetery. The half acre cemetery behind the church was used by Duvall’s early pioneers, but only for a few short years because seepage from the upper slopes kept the ground constantly wet and soggy. It was disconcerting for mourners to see gravediggers furiously bailing several inches of water before lowering the casket so the site was abandoned as a burial place ground sometime between 1902 and 1905. In 1909 and 1910 when a portion of the hillside had to be excavated for the Great Northern Railroad right-of-way, about 20 bodies were moved, some to the new Novelty cemetery south of Duvall.

The first person buried was a man from Tolt (now Carnation) who name has been lost. The second is believed to have been Mrs. James (Annie) Duvall, second wife of the town’s namesake. Among the graves remaining here are those of Stephanie Dyer Duvall, Ardle Pinkerton, Corinda Woodberry Pinkerton, Mr. Leyde, Mrs. Peterson, Mrs. Pingay, two Ruddy children, Florence Hible, and two Allen children. We also now believe that at least 44 people remain buried in the Pioneer cemetery. In 2009, the Rotary Club of Duvall commissioned a ground imaging project which yielded about 44 locations of “vault-shaped” anomalies a few feet below the surface of the ground. For years, people believed most of the bodies had been moved to the Novelty Cemetery and this puts that story into question.

Ardle Pinkerton was a Civil War veteran and cousin of Allan Pinkerton of the Pinkerton Detective Agency. His grandfather was a Revolutionary War soldier who discovered documents in the handwriting of Benedict Arnold in the shoe of British Major Andre and alerted authorizes that there was a traitor in their midst. Pinkerton was a Justice of the Peace in Duvall. His wife was Corinda Woodbury of the Woodbury soap clan. Annie Duvall, a Native American was actually buried just outside of the cemetery boundaries. Local historian and life-long resident, Ralph Taylor, describes the Civil War veteran’s gravesite (read the article here). Today, Mr. Pinkerton’s stone is the only one remaining in the cemetery – vandals and time have taken their toll.

In 1919, John Clark was the keeper of the records of the cemetery. Unfortunately, he kept the records in the attic of his house and in 1919 his house burned from the top down as the records were lost.

Time passed and the cemetery was nearly forgotten when Mrs. Edit Trulson, a long-time Valley resident, curious about who owned the cemetery, discovered she could purchase it by paying back taxes to the County. Her son, Bill Trulson, maintained the plot for many years in spite of being crippled by polio. When Edith passed away, Bill inherited the property, and with the help of his sister, Eleanor Zarimba, donated it to the Duvall Historical Society.

Once again, nature took its course and the cemetery was covered with undergrowth. In 1994, Ken Best, an Eagle Scout with American Legion sponsored Troop #411, led a massive cleanup project in the cemetery. He was assisted by scoutmaster, Mark Beier, his troop parents and some cub scouts. Their work has enhanced the dignity of the resting place of some of Duvall’s earliest pioneers.

In 2009, the Rotary Club, donated time and materials to enhance the cemetery. They built a picket fence (read the article here), and also provided funding for the ground imaging which indicated there may be as many as over 40 graves still intact. 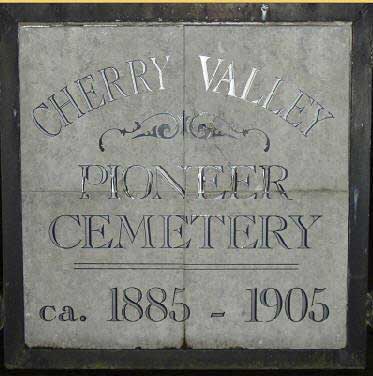 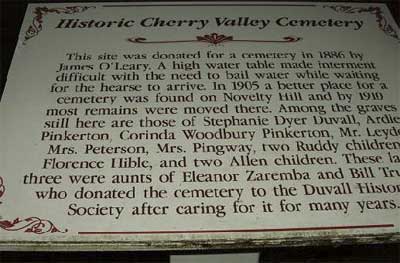